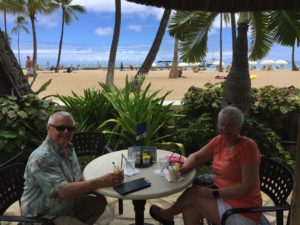 We are back from our “Retirement Cruise” and getting ready to hit the road. We love the Islands and spent four days at Waikiki Beach before boarding the repositioning cruise. The boat was going from Australia to Alaska. Carnival offered three separate cruises in repositioning their ship: Australia to Honolulu, Honolulu to Vancouver, Vancouver to Alaska and back to Seattle. We first bought the second and third cruises back to back. Carnival called us and said there is a law (I think he said the Jones Act) that says you cannot do back to back if it leaves the US and ends in the US. This would have started in Honolulu and ended in Seattle. He said we could do this if there was a one day layover between cruises. I said, “Wow, that’s nice of you to offer to hold up the cruise one day just for us!” …After he stopped laughing.. we had to cancel the second of our “Back to Back” cruises. It was fantastic and we got our fix of sea breezes, found our sea legs again, gained the mandatory ten pounds and had a very relaxing eleven days. WhIle on the boat, we almost bought our next cruise gong into the Panama Canal in 2017 but that cruise was already sold out. We will be cruising again in early 2017. We just have to find the perfect one!
When did we really feel like we were retired? It wasn’t when we thought. We thought when we retired on April 30th that on May 1st we would feel like we were retired… Right? Wrong… that’s not the way it worked. Not for us anyway…
There were many different dates we could say we felt we were retired. The first date would be the official date we were retired which was May 1, 2016. But, then we can look back and admit that we haven’t had our hearts into working for about five years. So, we could give a date around 2011. Or, we could say we gave the company a twelve month notice and could say we felt we were retired on April 30, 2015. Or… We could admit that we did absolutely nothing the last three weeks of working and say we felt like we were retired in early April, 2016.
However, we both agreed the first day we actually felt like we were retired was on May 17, 2016. The reason… We flew to Hawaii on May 2nd and we flew home on May 16th and arrived late. Did we feel retired on our “Retirement Cruise”? No, not at all, we felt like we were on another vacation and were going back to our business and work. Of course we knew better; but, that’s what it felt like. We have taken many vacations before and this felt like all the others. We didn’t really feel like we were retire until the next morning.
YES, it was the morning of May 17th. We got up and did not have to go to our business. WOW, we had no place to go. What’s with that? ? ? We didn’t have a thousand emails that accumulated while we were gone and needed to be answered. These smart phones are fantastic because you can receive all your business and personal emails. But, they are horrible for the same reason, you can receive all your business and personal emails. Our company emails were shut down on May 1st but that was a Sunday and we traveled on Monday and didn’t get to appreciate that they were gone. We have taken quite a few vacations over the last few months and that first day back was always the busiest with lots of emails and phone calls to make! There were fires that had popped up and needed to be put out. We always had that responsibility of running our business. Wait a minute, say that line again… “We always had the responsibility of running our business”. And…… guess what happened on the morning of May 17th? We had NO RESPONSIBILITIES. We had nothing to do! ! !
Yahooooooo! WE ARE RETIRED! …and it only took 17 days for it to sink in!
NOW LET’S GO TRAVEL like a retired couple and not as a vacation…